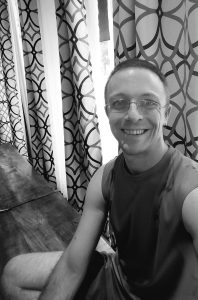 I first came to yoga while still a high school science/physics teacher. It was something that immediately resonated with me on a number of levels. At first it was the mix of physical exertition, play, and awareness that yoga allowed for along with the clarity afters. There is something to unrolling my mat, and choosing to be on my mat for the next ‘chunk of time’ and in a way exploring my body and becoming aware of it as I connect with my breath, and having a sense of humor as I move, realizing the body I have today isn’t the same as yesterday: that things that were easy on the mat yesterday might be far from easy today, and allowing myself to be ok with that.

More than that, was the ability for yoga to provide a calmness to my whole day, not just the set of moments on my mat. Having been a swimmer in high school and college, and then turning to running after, I was used to the runner’s high, and the endorphin rush of swimming: yoga, though, provided a calm, a grounding, along with a peace of mind that I could carry throughout my entire day. The “highs” from swimming and running were always amazing, but they were never something that lasted into the rest of my day or ‘added’ to my day. It was actually that grounding that yoga provided, that helped me get through the rough days of teaching and other moments in my life. I honestly think I wouldn’t have made it past the first year of teaching high school had it not been for yoga.

I’ve always been a ‘teacher’ which is why I knew that even when I chose to leave teaching high school science, I wanted to continue in that role in some way. Teaching yoga, is an opportunity for me to provide those that unroll their mat the chance to connect with their breath and through that, to explore what’s underneath the surface. At the same time allowing those that practice to gain an awareness of themselves that might transcend their time on the mat.